Recently, about 12 people died and thousands of people have contracted an illness after a polluted river from the toxic waste from a diamond mine in the southern Democratic Republic of Congo was reported. This news came after the locals of Tshikapa along Kasai river, in July, had complained about the contaminated water, which turned red, in the Kasai river, which is a tributary of the Congo river. Locals reported that huge numbers of dead fish floated in the river soon after turning red.

Repercussions of the leak

Unknowing further complications, millions of people staying on the river banks consumed these fish and suffered from diarrhea, skin, and other health-related problems. The Environment Minister of the Democratic Republic of Congo, Eve Bazaiba, said that this water has also killed many rare animals.

The Catoca diamond mine, a joint venture owned by Endiama, the Angolan state mining company and the Russian mining giant Alrosa, is one of Angola’s biggest diamond mine (produces about 75% of Angola diamonds). Researchers said a toxic leak upstream from its facility got mixed into the river Kasai, a tributary of the Congo river after the Nile, which caused this unprecedented environmental and human disaster, harming a major water resource.

As many as ten lakhs of people suffer from health problems in the country as four of five administrative territories in Kasai province, by the toxic river water. However, the consumption of river water has been banned by the local authorities. The provincial authorities have also said that the national water company is making efforts to increase supplies to those affected and provided around 40 tonnes of medication to the territories.

Why it has to be stopped

The water samples collected from the river, for testing, at laboratories of Kinshasa (Congo capital) showed high content of heavy metals-nickel and iron and the pH level of the water was also high (acidic), according to a statement from the minister. She also said this acidic water takes out oxygen from river water, killing lives there.

The reports, released in mid of August, suggested that the researchers tracking the spill from the source found that it took around 15 days to reach the city of Tshikapa (confluence of rivers Tshikapa and Kasai) through Lunda Norte and Lunda Sul, making the water unsuitable for consumption.

The reports said that this disaster’s immediate consequences included water pollution, poisoning and loss of aquatic flora and fauna, and waterborne diseases for riparian communities. There has been a disruption in human activities such as fishing and navigation. People are finding it hard to get potable drinking water due to a lack of access to domestic water services.

policies to prevent such leaks in future

Ms. Bazaiba has reiterated that it was a pleasant gesture that both the Angolan government and the mine’s owners recognized what had happened to the water source. The company said it had repaired the leak. The environment minister also said DR Congo would seek damages from the Catoca mine owners under the “polluter pays principle” but has not specified the amount yet. However, one employee from the mining company denied the allegation of leaking of toxin materials as the mining process did not use toxic materials.

Researchers from the US Department of Agriculture suggested that the people living around the Congo river should work in unison to bring down the waste dumped into the river and surrounding streams. There is a need to teach basic hygiene and sanitation practices to lead a healthy life away from several waterborne diseases.

InLocals reported that huge numbers of dead fish floated in the river soon after turning red, policies to prevent such leaks in future, Repercussions of the leak, this water has also killed many rare animals, Why it has to be stopped 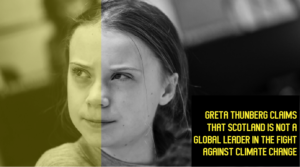 Next post Greta Thunberg claims that Scotland is not a global leader in the fight against climate change.