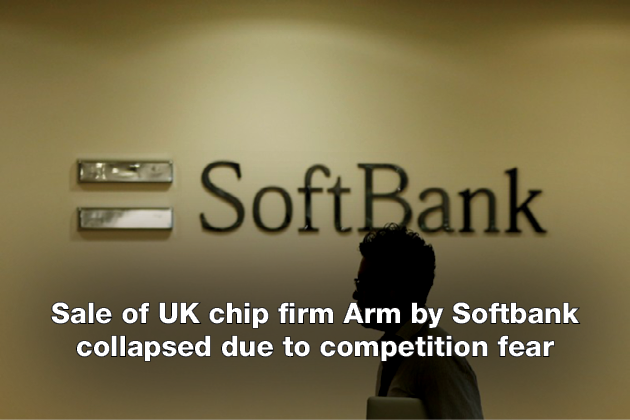 The value was at around $40bn, when the deal was first announced in September 2020.

SoftBank now aims to float Arm’s shares on the stock market by the end of March next year.

Major regulatory hurdles in the UK, United States and European Union was faced by the planned sale.

SoftBank and Nvidia agreed to end their sale agreement because of notable regulatory challenges which prevented the consummation of the transaction despite good faith efforts by the parties as was said by the companies in a joint statement to investors.

SoftBank’s chief executive Masayoshi Son added that they will take this opportunity and will start preparing to take Arm public and make further progress.

SoftBank did not highlight about any other details of Arm’s planned stock market listing, which has sparked guesswork amongst investors over which stock exchange or exchanges will be chosen for the sale.

It was also said in the statement that in line with the agreement signed by both firms in 2020, SoftBank would keep a $1.25bn non-refundable deposit paid by Nvidia.

The US Federal Trade Commission sued to block the buyout, in December. There was an argument that competition in the growing market for microprocessors for self-driving cars and a new category of networking chips could be damaged if Nvidia owns Arm.

The planned takeover was also being inspected by UK and EU regulators in the middle of concerns that it could push up chip prices and lower choice and innovation.

For the time being, Arm’s chief executive Simon Segars, who has been in the role since 2013, is resigning.

Mr Simon will be replaced by Rene Haas who most recently served as president of intellectual property at Arm.

Mr Hass said that with the uncertainty of the past several months behind them, they are emboldened by a renewed energy to move into a growth strategy and change lives around the world.

Mr Simon, who has been at the company for three decades now, will stay on in an advisory role to help with the transition.

Arm’s chip designs are the most important part of most smartphones and smart devices around the world.

Its technology is licensed to major companies including Apple, Samsung and Qualcomm.

In 1990, the company was incorporated and made its London Stock Exchange debut eight years later.

It was bought by SoftBank, in 2016, which is one of the world’s biggest technology companies.

SoftBank decided to sell Arm, in 2020 to help level up its finances after losing money on other investments, including shared office space firm WeWork and ride-hailing platform Uber.

Nvidia has become America’s most valuable chip company on the strength of its graphic processors, in recent years.

The backdrop of the global chips shortage came against Nvidia’s attempt to take over Arm.

Millions of products from cars to smartphones rely on computer chips but not enough of these are currently being produced to meet the demand.

Manufacturers have seen stocks of semiconductors plunge, as sales of devices were soared during the pandemic.

Ina new category of networking chips could be damaged if Nvidia owns Arm, Sale Of UK Chip Firm Arm, Sale Of UK Chip Firm Arm By Softbank Collapsed Due To Competition Fear, SoftBank now aims to float Arm's shares on the stock market, SoftBank would keep a $1.25bn non-refundable deposit paid by Nvidia, UK and EU regulators in the middle of concerns that it could push up chip prices and lower choice and innovation, UK microchip designer Arm to US technology group